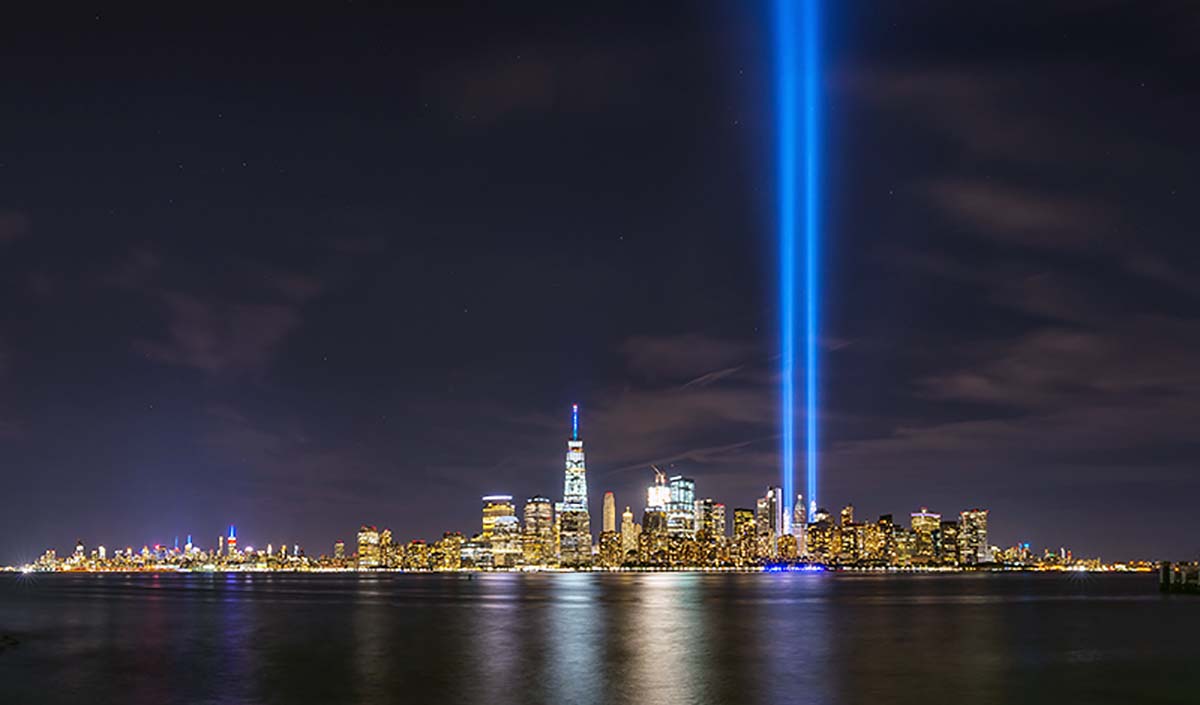 Late in August of 2001, I was bouncing between a couple of job sites in New Jersey - one in Secaucus and the other in Dayton. Getting between these two places required the unsavory activity of automobile jousting that is also known as trying to drive the Jersey Turnpike (i.e. No matter how fast you are driving, the person behind you is on your bumper and wants to go faster).  Heading back north to Secaucus one day, it was about lunchtime so I decided to stop at one of the local diners I had been acquainted with.  This was a quintessential New Jersey diner:  rounded art-deco styled building looking as if it was dipped in chrome (including the vertical window blinds).  Think something like an Airstream camper bulging on steroids.

From my vantage point in the parking lot, I was facing due East up on a bluff right above Lincoln Tunnel interchange (i.e. the same toll booths where Tony Soprano grabs his ticket in the opening to each episode of The Sopranos).  Looking to the East, the flat land gradually turns into a gentle slope that rises and makes an almost straight line across the horizon.  Climbing up the slope, you can see the familiar angles and shapes of buildings, structures, and the orthogonal grid of streets, the details of which are fairly clear.  Even though I knew that up and over this slope horizon lies the Hudson river and then the island of Manhattan;  if you did not know this, what you actually can see takes you by surprise. Directly straight ahead, you can see the top quarter of the Empire State Building.  Off to the right and much farther to the south, there were two cube shaped obelisks jutting up from this horizon.  On this crystal clear day, the details of the shapes and structures were still very clear on the hillside leading up to the horizon.  But these two obelisks appeared to be hand sketched with pastels and chalk in space upon the blue sky background: there were no hints of detail.  Without the detail, this would leave one to draw two very profound conclusions about these two towering obelisks:  the immensity of their size and the greatness of their distance away from the eye.

I had to put this into perspective.  I was brought up in a very small rural town complete with its sensibilities and naivety.  It was as if I was sitting on the steps of the courthouse in my hometown of Carlisle, Nicholas County, KY and looking to the southeast and seeing the tops of two tall buildings whose street address was somewhere the other side of Sharpsburg, KY, which is all the way over in Bath county.

Anyway, I grabbed the paperback I was reading and headed into the diner.  A paperback book, as most any of you introverts out there already know, is your best protection from nosy extroverts when you are dining alone.  Even though I had read this particular book several times, I was getting towards the end and wanted to finish it.  It was a beautiful cloudless and clear day and not very hot, so after I took up enough time at the table (New Jersey diners like fast customer turnover), I decided to sit in my rental car, roll down the windows, and finish the last couple of pages.  The ending sentence:

“….Then there was only the ocean and the sky and the figure of Howard Roark”

By the end of the book, Howard Roark is the architect of the world's tallest building being built in Manhattan and he is standing on the top of it.  I thought that maybe in real life at one point the architect or architects of these twin towers stood on top of these buildings and saw nothing but the ocean and the sky.  For all I knew they were standing there now.

I do not think we as ordinary humans fully grasp on a daily basis what it takes to design and then build such structures. We can easily get our arms around how humans can use their muscles to make things with their hands and even operate machinery to lift the steel and materials to put them in place.  But the real stupendous effort was actually performed by the human minds that conceived of the materials and their arrangement and then converted the content of their minds as lines on paper.  Further effort was required by those human minds who had the vision to understand those lines on the paper and put their resources and efforts into making it real.  Some folks might be humbled or afraid to stand at the base of one of these buildings and look up.  I think it makes us humans greater in the knowledge that such a comparatively small creature can conceive and then build such an immense structure.

Less than two weeks later, on September 11, 2001, on a crystal clear cloudless day just like the day I was at the New Jersey diner, terrorists crashed jet airliners into both of those buildings, eventually causing them to collapse to the ground.  It has been said that each plane, loaded with fuel and travelling at speed, unleashed the energy of about a kiloton of TNT.  This is roughly 1/20th of the energy of the Hiroshima atomic bomb.  I remember the grainy newsreel footage that I suppose most of us saw in school showing the utter devastation of Hiroshima: buildings and structures leveled for as far as the camera lens could see. Then think that 1/20th of the force that leveled Hiroshima was unleashed on each of these towers in an area less than the size of a football field. And those two buildings stood there and took it.

Approximately 17,000 people were in the towers that morning, of which about 2,600 did not make it out.  I do not want to relive any of the horrors of loss of life nor minimize its importance, but instead put it into a different perspective.  Over 14,000 people escaped because the towers stayed standing long enough for them to get out.  Perhaps these 14,000 souls owe their lives to the human minds that devised the structure and put the lines on paper from which these towers were built.

After the initial shock of the event dissipated most of us began to question why it happened.  I think that we sometimes think or believe we must be guilty of doing something wrong or evil to provoke such an act of destruction and brutality by others. I must caution against this thinking because I have found that when people try to make you feel guilty of something that is not obvious to you, chances are they are using guilt as a weapon to cover up or deny something wrong or evil they themselves are guilty of.

If humans are indeed created in the image of their creator, then the context of the term “image” is metaphorical and not physical.  What we then share with this creator is our minds and our ability to think, not the size and shape of our bodies.  The greatest homage we can do for this creator and ourselves is to use our minds to the best of our ability.  Devising and then making real such structures as these towers are among the heights of human endeavor.  The humans that wish to destroy them then must fundamentally fear the power of the human mind and thus try to claim faith is a substitute for knowledge, thus negating the mind.  Any humans who claim that faith is superior to knowledge only have the enslavement of other humans as their goal.  However, this does not mean that by accepting knowledge over faith in any way diminishes the importance or existence of a creator.  I think it makes the concept of a creator even greater.  I have heard it said “that without a creator, we have no morality, only opinions”.

It has been 20 years since this brutal act took place and I sometimes still fall for the trap of accepting unearned guilt dispensed by our attackers because they claim to be acting on behalf of the human creator.  But I take solace when using my mind and think:  These destroyers are negating the mind, which means negating their creator, which means it is inherently evil. The only power evil has over me is that which I let it.  I saw these great towers, I know they were real, and no amount of destruction or negation of the human mind can take away the fact that they existed.  And to the people who ignore the mind and desire to destroy human greatness, I would use the words of Ayn Rand to tell them:

I hope to be fortunate to reach an old age when I can sit on the courthouse steps in my old hometown and perhaps gather around some youngsters and tell them about the great things that humans can do and build and the things I have seen. It may be wishful thinking, but by that time I would also like to be able to tell them that long ago there were people who wanted to destroy human greatness, but they no longer exist.  Maybe in the minds of these youngsters the seed will be planted to recognize human greatness so they too can marvel and say “Look at what we can do” and then go out and make it real.